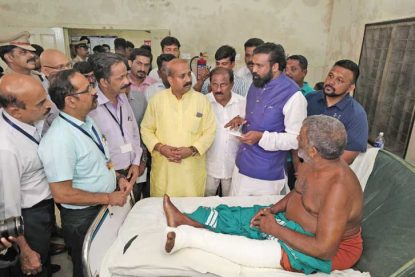 Udupi: After becoming state health minister recently, B Sriramalu stayed at the district hospital at Ajjarkadu here on his first visit on Friday, September 27.

“I have been travelling to different districts to check the prevailing conditions there and to help district hospitals to get basic infrastructure facilities. I have made it a practice to stay at the hospitals at night. I have spoken to Udupi MLA Raghupati Bhat and concerned persons in the hospital regarding upgradation needs of the hospital and provision of basic facilities,” said the minister speaking at  a press meet at Circuit House, Bannanje here.

“I am committed to fulfilling the demands of the people and to approve construction of a 250-bed district hospital here. 60% of the people approach district hospitals for addressing health problems. In accordance with the Prime Minister’s vision we will put sincere efforts towards providing facilities so as to affectively handle competitions by private hospitals. Modi has drawn up many plans in this regard. He has given 30% incentives under ‘Ayushman Bharath’ health scheme,” said the minister.

The minister noted that people were losing confidence in district hospitals due to poor services and instead prefer to go to private hospitals to get better medical service and attention. “I have always believed that serving the poor is equal to worship of God. I will work on it,” he claimed.

The minister pointed that it has been just 45 days since he took over as the new health minister of the state and confessed that he was aware that he cannot bring changes to the system overnight. “I have instructed the department to recruit MBBS graduates on direct appointment basis and it is my first priority too,” he informed.

Agreeing that there is a shortage of 17,000 staff in health department in the state the minister said, “As I have received complaints from the general public and MLA Bhat about the shortage of doctors, surgeons, paramilitary staff etc here, I have already discussed the matter with the government. I have instructed all DHOs and surgeons to fill vacant posts under direct recruitment scheme to avoid delay in appointments. I will also discuss the matter of enhancing the pay of the doctors, who work in hilly regions,” he said.

Responding to a query regarding Kusamma Shambhu Shetty mother and child hospital having been registered as a private hospital under Karnataka government, Ramulu said, ‘it happened during the term of the previous government and I will rectify the errors.”

Answering to query on providing relief to endosulfan victims the minister said that to the best of his best knowledge, some NGOs are working on it. “It is a rare disease. I have proposed to add government employees, lawyers and media persons under Arogya Bhagya scheme to get free treatment,” he said.

“I have been visiting hospitals to instill a sense of responsibility in the minds of government hospital officials. So, this operation is required. This is not just for getting publicity. I am doing it from the depths of my heart. This is just the beginning and it will continue till the district hospitals are reformed,” he claimed.