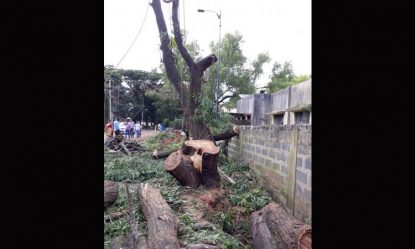 Udupi: The state has already witnessed millions of trees being felled for paving of state and national highways. Now, 1092 trees are to be sacrificed for widening a 7 k.m. long four-lane road in Udupi district.

PWD department has already submitted a proposal to the Forest Department for permission to clear these 1092 trees.

Many environmental activists including Premanand Kalmadi have started raising voices against this move and stated that The Karnataka Preservation Of Trees Act must be scraped as frequent occurrences of such tree felling mocks the essential purpose of the Act.

Previous: US to start accepting applications for H-1B visa from April 1
Next: Bhatkal: Man injured in road accident, family lodges complaint of attempt to murder