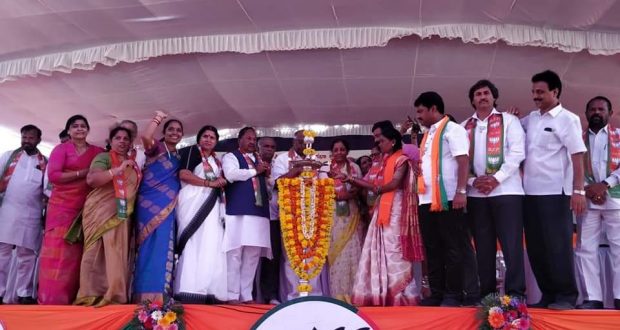 Karwar 16 April 2019:(Bhatkallys News Bureau) “Narendra Modi has to be re-elected as Prime Minister to fight against corruption and to fulfill the needs of common people” Defence Minister Nirmala Sitharam on Monday said here at Maladevi ground of Karwar where she was campaigning for Anant Kumar Hegde, BJP candidate from Uttara Kannada constituency.

Speaking at the event in she said “Anant Kumar who is the Current MP of this constituency has maintained discipline in his work at the Centre. He has played an important role in compensating the people who had lost their land in Sea Bird project”.

She further added, “During Congress rule they always suppressed Indian Army and did not give them their due respect and politicized their affairs. While during the tenure of PM Modi, Army not only got their due respect but also gave quick response to the terror factor through surgical strike and Air strike and kept the terrorist out of the nation”

Goa Chief Minister Promod Sawant who participated along with Anant Kumar Hegde also addressed the public gathering and spoke in Konkani and said, “I know the most of the people here speak Konkani and said it feels good if someone speaks in Konkani and that is why I have come here. I am sure you will elect Anant Kumar Hedge with a margin of more than five lakh votes. And I am sure you will create a record in India by voting Hedge with the biggest margin”

BJP candidate and Union Minister Anant Kumar also addressed the public rally and said, “Prime Minister Narendra Modi has to be re-elected to strengthen the nation. 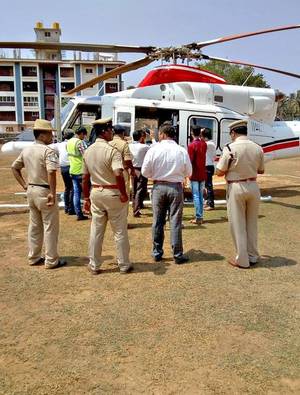 Prior to the public gathering Election Commission officials in Uttara Kannada checked the helicopter of Defence Minister Nirmala Sitharaman after she landed at Bandishitta Helipad of Karwar for campaigning for her party candidate in the Lok Sabha elections.