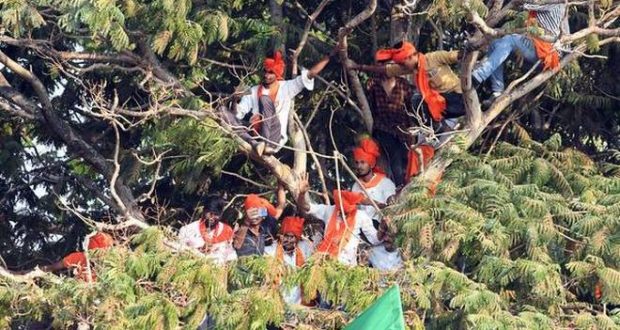 Hundreds of people gathered on the flanks of Airport Road and other roads inside the city to get a glimpse of Prime Minister Narendra Modi on his way to the ‘Vijay Sankalp’ rally here on Saturday.

Mr. Modi appeared to have been surprised by this and said: “It was a long way from the airport to the venue. I saw not just a human chain, but a human wall all along the route.”

The police had erected barricades along Mr. Modi’s route to prevent people from jumping on the roads.

People waited for the Prime Minister’s arrival taking shelter under trees and buildings as his arrival got a little delayed.

When the Prime Minister’s cavalcade arrived, the people thronged the barricades to get a glimpse and shouted “Modi, Modi”, while he waved at them.

A senior police officer said he was surprised after women and children turned out in large numbers to see Mr. Modi.

As some supporters climbed trees around Nehru Maidan to get a clearer view, the Prime Minister at the beginning of his address urged them to get down. “If you get hurt, I’ll be hurt. Kindly get down,” he told them.

While the programme was scheduled at 3.30 p.m., party supporters began trickling in from 2.30 p.m. onwards.

The crowd mainly comprised youngsters, including women and college students. Many wore the ‘chowkidar’ attire while arriving at the programme.

The police had stopped the entry of buses, city as well as service, into the CBD from 1 p.m. itself and later restricted the entry of cars from 3 p.m. to manage the crowd.

Immediately after the programme, the crowd, estimated to be over one lakh as per the organisers, began dispersing slowly without giving any room for chaos.

Previous: ’Wanted’ expat arrested at UAE airport for past crime
Next: One killed as truck topples in Bhatkal