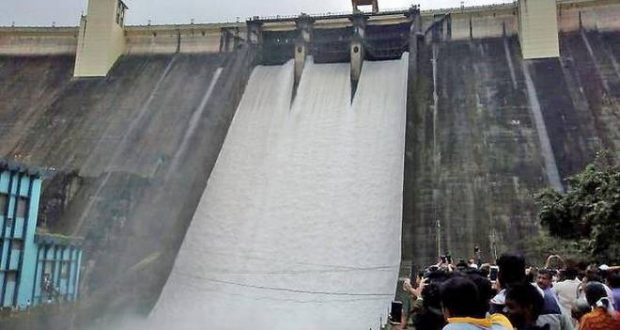 Karwar 31 August 2018: (Bhatkallys News Bureau) The Crest gates of the Supa dam across the Kali river in Joida were opened on Wednesday to release water in a bid to maintain the water level of the dam at ‘safe’.

Abdul Majeed, Executive Engineer of Supa dam informed the media that the maximum capacity of the dam was 147 tmcft, while on Wednesday the water level inside the dam had reached around 140 tmcft. “The water level at the dam has reached 95% of the full capacity and considering the forecast of further rains in the catchment area, it was decided to release water from the reservoir”. he added.

Nanjundeshwar, Chief Engineer (Electrical) of KPCL said water being released would be collected at Bommanahalli pickup dam. “However, the water would be utilized for power generation” he added.

As soon as the news of the opening of crest gates spread in the locality, hundreds of people gathered near the dam to get a glimpse of the spectacular view of water gushing out of the dam.