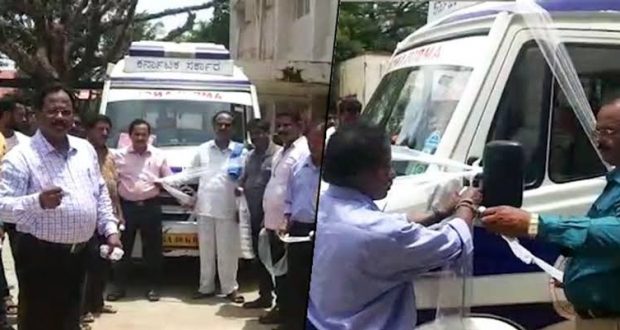 Karwar: On June 18, several people in Karwar, Karnataka protested the unavailability of 108 ambulances to shift patients from one hospital to another.

In the evening of Tuesday (June 17), a man reportedly met with an accident and suffered severe injuries on his leg. The victim was rushed to Karwar Government hospital where the doctors told the victim’s family members that the patient needed to be shifted to a hospital in Mangaluru, Karnataka as the victim’s injuries were too severe.

The family members agreed to shift the patient from Karwar to Mangaluru but were met with lack of 108 ambulance services in the city.

The victim was shifted to Mangaluru hospital with the help of a private ambulance service.

However, the family members returned the next day along with several others and protested the unavailability of 108 ambulances by wrapping them with bandages.

Recently, on June 8, a hashtag #WeWantEmergencyHospitalInUK sprung up, using which, people of Uttara Kannada requested the state government to construct an emergency hospital in their district, considering there was no nearby hospital.