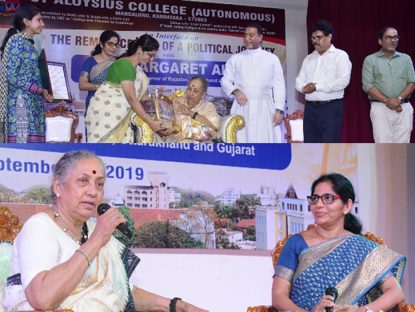 Mangaluru: “There have been a series of resignations from IAS cadre officers and judges, which poses a serious threat to our country,” said former governor of Gujarat, Rajasthan, and Uttarakhand, Margaret Alva speaking on the issue of ‘An interface on the reminiscence of a political journey’ here at St Aloysius College on Wednesday, September 11.

“Unnecessarily the central government has been interfering in all aspects of administration. At the same time, there has been a considerable rise in resignations by government officers. There is unprecedented interference in the functioning of the enforcement directorate, income tax department and CBI in the country, which results in huge loss to our country as well as for the citizens,” she noted.

“There has been a steady stream of resignations by senior officers. The youth of the country are silent and even the social leaders are silent. They have chosen not to speak about such a serious issue. Central government is misusing IAS, IFS officers, CBI and RBI. The attitude of raising questions has been dead, or could it be that people who raise questions are getting killed?” she questioned.

“There is no discussion in the parliament about the central government interfering with everything and everywhere, which can lead to serious repercussions. Without an active opposition, it is impossible for democracy to thrive. The country is facing a serious economic crisis that has hugely impacted the citizens. Elections are decided by electronic machines in which I have no faith. Even the people have no faith in them,” she pointed.

“BJP is like a washing machine. Those who indulge in crime get clean chit once they are in BJP fold. Supreme Court is also silent. Case has been registered against Kanhaiya Kumar for protesting in the university seeking justice. Whenever we speak about democracy, we get labeled as anti nationals which is unfortunate,” she felt.