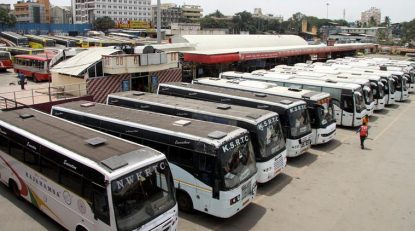 Bengaluru: Fares of state transport undertakings -KSRTC, NWKRTC and NEKRTC – are hiked bus fares by 12% with effect from 12 am on Wednesday.

” We had asked for a hike of 20% in the fares due to the increase in the operational costs, but the government has approved the fare by 12%. The price of oil has been going up over the last two years and so is employee salaries. The government approval has come more than a year after the corporation made the proposal for the hike,” KSRTC managing director Shivayogi Kalasad was quoted speaking to Deccan Herald.

A press release by the KSRTC said there was no increase of fares on passes issued to students and physically challenged persons.

The corporation stated that the rising fuel prices have led to an annual financial burden of Rs 260.83 crore on the corporation. In addition to this, the corporation has factored in an increase of allowances given to employees. “Overall increase in the operational cost is Rs 601.21 crore per annum,” the release stated.