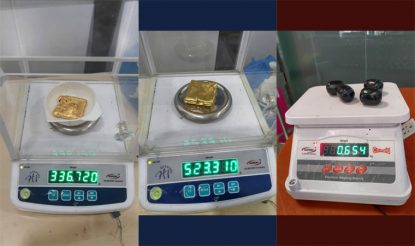 Gold worth over Rs 63 lac seized at MIA

On January 6, gold weighing 336.7 grams was found in possession of an inbound air passenger. The passenger who arrived on Air India flight from Dubai had concealed the gold in his socks. The value of the seized gold is estimated to be Rs 13.43 lac.

In the other two instances that took place on January 7, 1239 gram of gold valuing Rs 50.3 lac was confiscated from two passengers who arrived from Dubai via the Air India flight. One of the passengers had attempted to smuggle 523 gram gold in paste form.

The arrested passengers have been handed over to the police for further action.