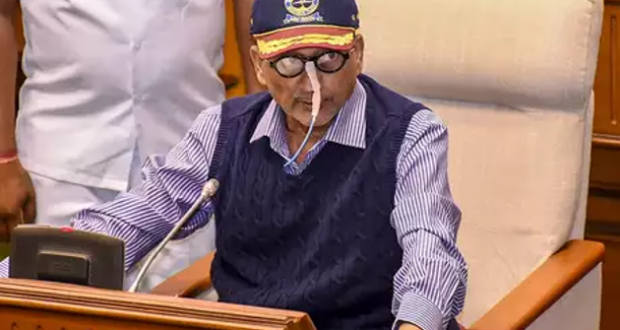 PANAJI: Manohar Parrikar, Goa Chief Minister and former Defence Minister, who had been battling a pancreatic ailment for more than a year, has died at his son’s home in Panaji. He was 63.

Mr Parrikar’s health had been fluctuating for several days and worsened on Saturday morning. The former Defence Minister had been in and out of hospital in Goa, Mumbai, Delhi and New York since February last year.

The four-time chief minister had said in January that he “will serve Goa till my last breath.” Mr Parrikar, in recent months, had made public appearances with a tube in his nose, looking frail.

While presenting the state budget of the Goa assembly in January, he made up for his weakened delivery with rousing words: “Present circumstances have prevented me from delivering a detailed budget speech, but there is a josh that is too high, very high and I am in hosh. Fully in hosh.” He had paused for sips of what news agency IANS said was medication.

Mr Parrikar had also inaugurated a bridge in Goa earlier this year where he drew loud cheers after he delivered the punchline – “how’s the josh?” – from the blockbuster “Uri: The Surgical Strike”. Mr Parrikar was the Defence Minister in 2016 when India conducted a surgical strike on terror launch pads across the Line of Control days after the terror attack in Jammu and Kashmir’s Uri.

Mr Parrikar headed a coalition government, which is supported by the Goa Forward Party (GFP), the Maharashtravadi Gomantak Party (MGP), and three Independent lawmakers in Goa. His death leaves the state in a crisis, as the Congress has written to the Goa Governor to dismiss the “minority” government, and to invite them to form the government.

It was during Manohar Parrikar’s tenure as Defence Minister that the re-negotiated Rafale fighter jet deal between India and France was inked. The deal has dominated headlines as the Congress has accused Prime Minister Narendra Modi of corruption while alleging Mr Parrikar had no idea about the deal signed between the two countries.