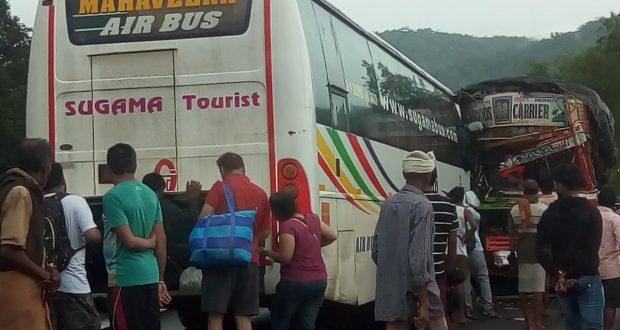 Ankola: An accident between a private bus and a lorry left eight people, including the drivers of both the vehicles, injured. The incident took place on National Highway 66 near Ankola on Friday, June 14 morning.

The bus, belonging to Sugama Travels, was plying from Bengaluru to Goa. It collided head on with a Maharashtra based lorry which was on its way to Mangaluru. The bus and lorry drivers got pinned to the steering wheels of their respective vehicles due to the impact. The locals, police and passengers had to help them out of their seats.

The injured persons were admitted to a hospital in Ankola. The highway was completely blocked due to the accident and long queues of vehicles were seen on either side of the accident spot. The police managed to clear the traffic.

A case has been registered in the Ankola police station.

Previous: Apples, Almonds, Walnuts to get costlier from next week as India slaps retaliatory tariffs on US goods
Next: Photos: World blood donors day 2019 celebrated at Karwar