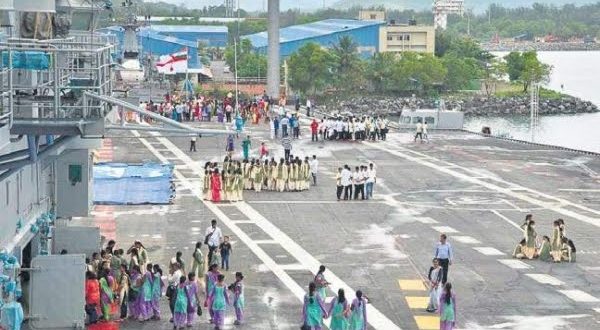 Karwar 21 July 2019: Thousands of people thronged the country’s only aircraft carrier, INS Vikramaditya, at INS Kadamba Naval Base in Karwar on Saturday.

As part of the 20th anniversary of Kargil Vijay Diwas, which will be commemorated on July 26, the navy opened its giant vessel for the public.

Both the ships were open for public visit for a day and it has attracted people from different corners.

It was a festival for the public as well as the naval staff on board Vikramaditya and Suvarna. The crew welcomed the public with soft drink and snacks at the deck.

People from Dharwar, Haveri, Shivamogga, Udupi and other districts, and also from Goa, visited the base.

Gurudatta Joshi, a visitor from Hubballi, said he was very happy to board INS Vikramaditya and take pictures with his family members on its deck.

More than 1,000 students from various schools and colleges of Karwar and Ankola taluks visited the ship. The crew members of the aircraft carrier briefed about the vessel and its importance to the navy.

The students were also taking photographs at the deck in front of the National Flag.

Prashant Naik, a student from Ankola, said he purchased a key ring with the vessel name imprinted, to keep it as a memoir of his visit.