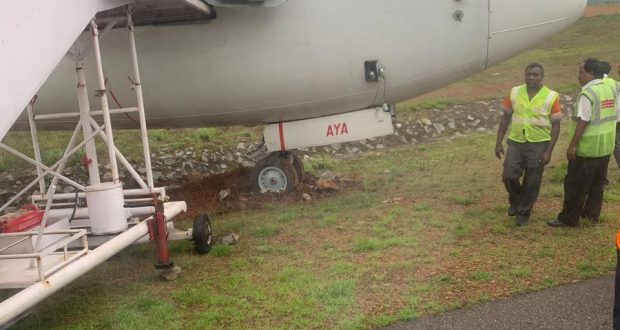 Mangaluru: An Air India Express Dubai to Mangaluru aircraft (Flight IX384) veered off the taxiway around 5:40 pm on Sunday evening. All passengers are safe and have been deboarded. The aircraft has got stuck in the grass and the authorities are preparing to tow it to hangar.

The aircraft went off course and out of the main taxiway while approaching the parking area after landing at the Mangaluru International Airport.

“All passengers are safe & the aircraft is being checked by Air India Express engineers. An internal investigation has been ordered, Directorate General of Civil Aviation (DGCA) has been informed about the incident,” a spokesperson from the airline told ANI.

The Boeing 737-800 VT-AYA aircraft had 183 people on board all of who were safely evacuated.

The incident comes just two days after an Air India flight made a ‘precautionary landing’ in London’s Stansted Airport after a bomb scare. The threat was later found to be a hoax.

The British Air Force scrambled Eurofighter Typhoon jets jets to escort the Mumbai-Newark Air India flight AI 191 flight to the London Stansted Airport after the initial scare. It was later taken to an isolated part of the airport.

An RAF spokesman was quoted as saying in the British media: “The RAF can confirm QRA Typhoons were launched this morning from RAF Coningsby to intercept a civilian [aircraft]. The aircraft was escorted to Stansted. The Typhoons transited at supersonic speed for operational reasons; any inconvenience caused to local residents is regretted.”

Previous: Telangana officer went to plant trees. She was thrashed by TRS workers
Next: Pakistan receives $500 million from Qatar as first part of promised $3 billion