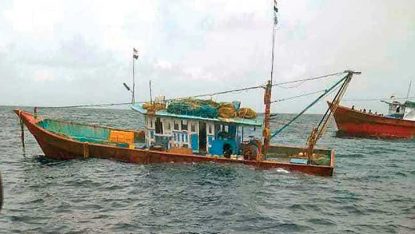 Mangaluru/Kapu:  21 fishermen were rescued after two boats sunk in the sea in two different incidents at Kapu and Ucchila.

The vessel named “S M Fisheries” belonging to Basheer Dawood Nekkiladi left Mangaluru old port for fishing on Friday and as it reached near Kapu, the boat started taking in water at around 3:30 pm in the afternoon. The 9 fishermen aboard the vessel were rescued by another fishing boat in the vicinity.

In his complaint to Mangaluru Trawl Boat Union, the owner of the vessel has informed that the boat has sunk. An estimated loss of Rs 30 lakh has been incurred.

Kapu: A fishing boat named ‘Kariya Jodi’ belonging to Ashok Putran of Ucchila left for fishing on Friday and was damaged after getting caught in the waves. The 12 fishermen aboard the vessel were rescued by another boat identified as Shivaprasad. The damaged boat had been towed to Malpe bunder.

Accident on the previous day as well

A boat belonging to Itappa Suvarna had gone on a fishing trip on Thursday and as it was returning back to the shore, it met with an accident ad all the fish in the boat was lost to the sea. But it is learnt that no danger was ensued.

Previous: Boat with 61 onboard capsizes in Godavari River: At least 11 dead, several missing
Next: Scam to lure medical, engineering aspirants with fake admission busted in Bengaluru