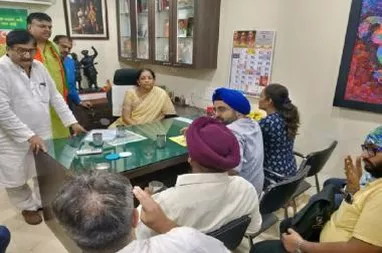 Mumbai: Finance Minister Nirmala Sitharaman on Thursday faced the irate customers of Punjab and Maharashtra Co-operative Bank after depositors whose money is stuck protested outside the BJP office in Mumbai.

Sitharaman, who was to hold a press conference on the Maharashtra elections, delayed the media briefing and spoke to the protesters, assuring them that she would talk to RBI Governor Shaktikanta Das about allowing PMC customers to withdraw their money and convey to him the urgency of the matter.

“Once again this evening, I shall talk to him (RBI governor) and convey the sense of urgency and distress that the clients of PMC have expressed before me and I shall request him to expedite the clearing of or giving permission for withdrawal of their monies which are deposited,” the minister said.

The PMC Bank was put under “directions” by the Reserve Bank of India (RBI) last month due to weak financial health, wherein the central bank has capped the deposit withdrawals at Rs 25,000 for the next six months.

PMC is in bad health allegedly due to its exposure to the near bankrupt realty player HDIL, to which it has loaned over 70 per cent of its Rs 9,000 crore in advances.

Sitharaman said she also explained to PMC bank customers that RBI takes action in cases where malpractice is detected, and it is doing what is to be done by law.

Although the bank was not registered by the ministry of finance, Sitharaman said she has asked secretaries in her ministry to study in detail to find out what went amiss in order to formulate amendments to avoid such cases in the future.

“We will try to bring in resolutions in the upcoming winter session of the Parliament and will also take legislative steps to avoid such cases,” she said.

The protesting customers, who have argued that the revised withdrawal limit of Rs 25,000 is too less, were not convinced by the assurance and said if the government was serious about the issue, it would have considered a bailout.

“If the government can give Rs 16,000 crore to the State Bank of India for recapitalisation, then why can’t it bailout us,” asked a customer outside the BJP office. He said the account holders would continue the protests until Prime Minister Narendra Modi intervenes in the matter.