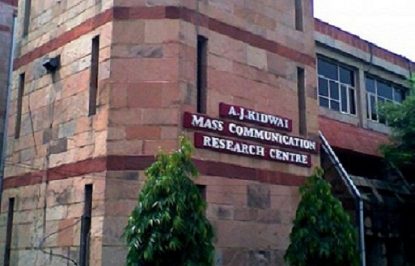 New Delhi: The Jamia Millia Islamia on Sunday clarified that it has not released the new video which is circulating on social media showing some men in paramilitary and police personnel uniform beating up students in the university’s library in December 15.

“It has come to our notice that some video with regard to police brutality in Dr. Zakir Husain Library of the Jamia Millia Islamia (JMI) is in circulation. This is to clarify that the video has not been released by the university,” the institute’s public relations officer Ahmad Azeem said.

The video was released by the Jamia Coordination Committee (JCC), a group comprising JMI students and alumni. The group was formed after the alleged police brutality on the campus on December 15.

The university had turned into a battlefield on December 15 as the police entered the campus to look for outsiders who were involved in incidents of violence and arson a few meters away from the educational institute during a protest against the Citizenship (Amendment) Act.

According to the public relations officer, the JCC, which is actually a joint coordination committee of students and alumni of the university, is spearheading the stir against the Citizenship (Amendment) Act, the National Population Register (NPR) and the National Register of Citizens on the Maulana Mohammed Ali Jauhar Road outside the university’s gate number seven.

“We have also requested Twitter to verify our official handle and will also ask other social media platforms to do the same,” he said.