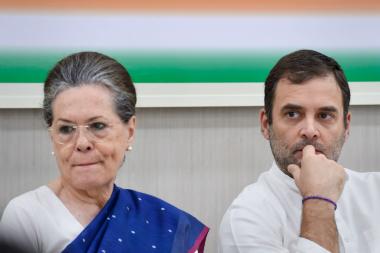 The announcement was made late on Saturday night after the Congress Working Committee (CWC), the party’s topmost body, accepted Rahul Gandhi’s resignation during its second meeting of the day.

A number of leaders, including state chiefs and MPs, backed Rahul Gandhi to continue in the post despite his refusal to reconsider his resignation. However, he did not budge.

The CWC then decided to name Sonia Gandhi as the interim party chief.

“Sonia Gandhi has the experience and from time to time, we have turned towards her for guidance, so it was only appropriate that she takes over,” said Congress spokesperson Randeep Singh Surjewala at a press conference after the meeting ended.

Senior leader PL Punia said the party would decide on a new chief after internal elections. “We have decided to have Sonia Gandhi as the interim president of the party,” he said. “We will have

a full-time president after our internal elections.”

“The CWC considered the views of PCC presidents, CLP leaders, AICC secretaries and members of parliament. The CWC unanimously resolved that Shri Rahul Gandhi should continue as Congress president, as desired by all who were consulted today, and requested him to accept this decision. However, he declined to withdraw his resignation,” the party said in a statement later.

“Consequently, the CWC unanimously resolved to request Sonia Gandhi to take over as interim president pending the election of a regular president by the AICC,” it added.

Congress leader KC Venugopal at the press briefing said the CWC had passed three resolutions at the meeting. “The CWC places on record a profound sense of appreciation and gratitude for the leadership of Rahul Gandhi. He gave the party a new sense of modernity and aggression and gave numerous opportunities to youngsters,” he said, reading out the first one.

“Irrespective of the results of the 2019 Lok Sabha elections, Rahul Gandhi gave us a new direction and aggression. His input and advice will be constantly sought,” added Venugopal.

The second CWC resolution, after consultation with multiple Congress committees, sought that Rahul Gandhi continue as the party chief and take back his resignation. However, he refused.

The third resolution was related to the situation in Jammu and Kashmir, which has been under curfew since the Centre passed a bill in Parliament to scrap Article 370, giving it special status, and bifurcated the state.

“We want the government to be transparent on the matter (the prevailing situation in Jammu and Kashmir),” said Venugopal.

Rahul Gandhi, who attended the CWC meeting and left midway, said there have been a few reports from Jammu and Kashmir about violence there and Prime Minister Narendra Modi must assuage

concerns over the matter in a “transparent” manner.

The decision to appoint Sonia Gandhi as interim president was made after a marathon meeting of the CWC, which arrived at the decision after discussing reports of five groups, formed earlier in the day, and scrutinising the names of Rahul Gandhi’s potential successor.

Earlier, both Sonia Gandhi and Rahul Gandhi had recused themselves from the process, saying they cannot be part of the consultations as they have been Congress presidents in the past and would not like the opinion of party leaders to be influenced in any manner.