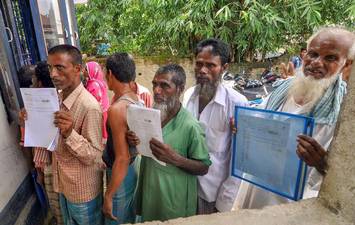 The Supreme Court on Tuesday declined the government’s plea to re-open the National Register of Citizens (NRC) process in Assam and conduct a sample re-verification of data collected, especially in the border districts of the State where cross-border “infiltration” from Bangladesh is high.

A Bench of Chief Justice Ranjan Gogoi and Justice Rohinton Nariman said the security regime for the NRC data should be on the same lines as that of Aadhaar information.

Orders under Illegal Migrants (Determination by Tribunal) Act should be challenged in the Guwahati High Court. The NRC data should only be published online on August 31.

Those born after December 3, 2004 will not be included in the NRC if any of the parents is a doubtful voter or a declared foreigner by a tribunal.

In the previous hearing, the court stood firm by its resolution to have the NRC list published by August 31.

The Bench also had said that it was not going into the report of NRC State Coordinator Prateek Hajela in which he mentioned leakage of information on it in the Assam Assembly and certain statements made by the Leader of the Opposition there and Santanu Bharali, legal adviser to Chief Minister Sarbananda Sonowal.

During the hearing, the Bench had been informed that provisions under the Citizenship (Amendment) Act had been applied for considering the individuals under the NRC.

Section 3(1)(b) says every person born in India on or after July 1, 1987, but before the commencement of the Citizenship (Amendment) Act, 2003 and either of whose parents is a citizen of India at the time of his birth shall be a citizen of India by birth.

Section 3(1)(c) provides that a person is a citizen by birth if born on or after the commencement of the Citizenship (Amendment) Act, 2003, and both of his parents are citizens of India or one of whose parents is a citizen of India and the other is not an illegal migrant at the time of his birth.

On July 23, the Supreme Court extended the deadline for publication of the final NRC in Assam by a month to August 31.