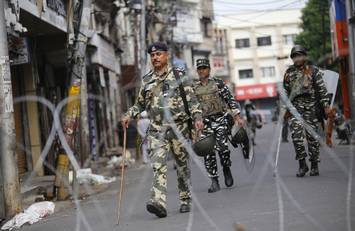 Iltija Javed, daughter of People’s Democratic Party (PDP) leader Mehbooba Mufti, has described the government’s decision to remove the special status accorded to Jammu and Kashmir and to reorganise the State into two Union Territories as “completely undemocratic,” reducing Kashmiris to being “second-class citizens in their own State.”

Speaking to The Hindu from Srinagar, Ms. Javed said: “This is a ruse by the State to break her spirit. We don’t know how she is at the moment, as she was taken away last evening after being under house arrest.”

“Kashmir itself has become like an open-air prison, we are not being allowed to speak out. Now I know what it is like to be in Palestine,” she added.

“The way this is being projected by the Centre is that the removal of special status is something that is good for Kashmiris. Do you think Kashmiris have such low IQ (intelligence quotient) that they don’t know what is good for them? Or what they want for themselves? Should it have been done so undemocratically?,” she said.

She said there was fear in the Valley. “The way forward, as I see it, is for political parties in Kashmir to get together, sit calmly and go for a front that would reflect what is happening. Perhaps, the one good thing out of all this is the fact that it can provide a unifying factor for all political forces in the State,” she said.

Previous: All Google hardware including Pixel phones will soon use recycled materials
Next: 6 dead in fire at building in Delhi, Arvind Kejriwal visits site