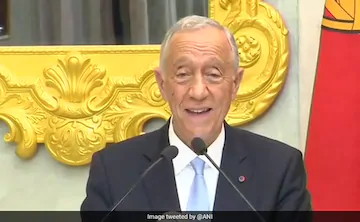 Panaji: Portuguese President Marcelo Rebelo de Sousa on Sunday visited churches in Old Goa, including the Basilica of Bom Jesus where relics of St Francis Xavier are preserved.
He visited the Institute Mater Dei Santa Monica, a church in the Old Goa heritage complex, and the Christian Art Museum located in the premises. All these structures at Old Goa are part of the complex certified as world heritage monuments by United Nations Educational, Scientific and Cultural Organization (UNESCO).

“The Portuguese president prayed to the relics of St Francis Xavier and went around seeing the building, which was constructed in 1605,” he said. The president was “impressed” with the structure and the spiritual vibes at the Basilica, he added. The relics of Spanish saint are revered across the world by faithfuls.

The Portuguese president arrived on a two-day visit to Goa on Saturday after which he chaired a function where several memorandum of understanding (MoU) were signed between Goa and Portugal in sectors like education, ship-building, water and sewage management.

He also addressed a seminar on “Urban Designs” in Panaji on Saturday before attending a dinner hosted by Goa Governor Satya Pal Malik.

The Portuguese president on Saturday said he was feeling at home in India, especially in Goa because of the coastal state’s “human micro-climate”.