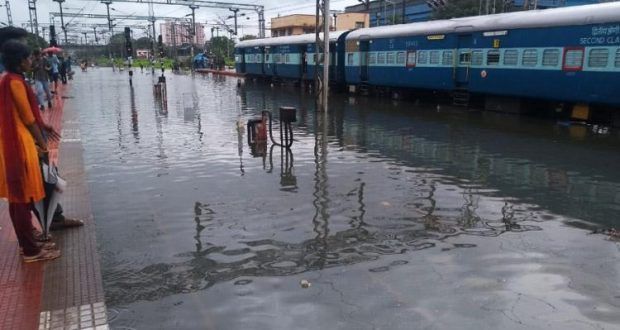 Residents in several Kochi neighbourhoods woke up to inundated streets, as incessant rain lashed the city since the wee hours of Monday. With many arterial roads such as MG Road, Ernakulam North and Menaka waterlogged, it was a motorist’s nightmare with bumper-to-bumper traffic. Many shops in the area remained closed due to inundation.

With water flooding railway tracks near Ernakulam Junction Railway station, officials announced the cancellation of six passenger trains. Two trains (56379 and 56384) running between Alappuzha and Ernakulam Junction Railway station, two trains between Kayamkulam and Ernakulam (56381 and 56382) both running via Alappuzha and two other trains running between Kayamkulam and Ernakulam (56387 and 56388), both of them via Kottayam have been cancelled. Venad Express (16302) will be diverted through Ernakulam Town station. 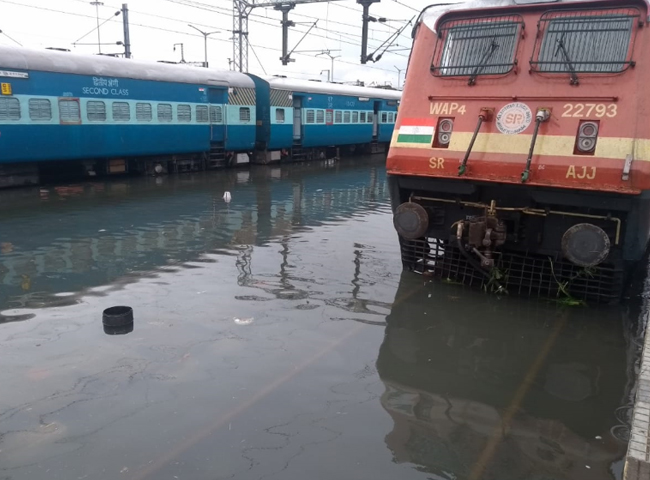 Also, Kollam-Ernakulam Passenger will be short terminated at Thripunithura. Janshatabdi(12076) has been short terminated at Alappuzha, Guruvayur Express (16127) has been short terminated at Ernakulam Jn. Bengaluru Intercity (12678) is rescheduled to leave Ernakulam Jn. at 11:30, Mangala Express (12617)  is rescheduled at 13:00 hrs. Thiruvananthapuram Chandigarh Sampark Kranti (12217) is diverted to run via via Kayamkulam- Kottayam-Ernakulam Town. Train no 16346 Thiruvananthapuram – Lokmanyatilak Netravathi will run diverted via Kayamkulam- Kottayam-Ernakulam
According to officials, there has also been a minor landslide between Vaikom and Piravom Road.
Meanwhile, polling in the Ernakulam bye-elections is also underway. Rains temporarily affected the polling operations in six booths. Polling booths in areas which were heavily inundated were shifted. However, polling resumed soon after.
As of Monday morning, three relief camps have been opened in the district – two in Kanayannur taluk and one in Kochi taluk. Regions in Elamkulam, Poonithura, Edapally North, Edapally South, Cheranalloor, Thrikkakara and various areas of West Kochi like Chullickal, Palluruthy and Thoppumpady have been inundated.
India Meteorological Department (IMD) has declared an orange alert for the district on Monday and Tuesday. As per reports of IMD, regions near Kochi airport received a rainfall of 160.4 mm on Monday morning.
Source: The News Minute
2019-10-21
Fristen Dias

Previous: ”But Pakistan is Pakistan”: India hits out over stopping of postal mails
Next: 141 prisoners to walk free for good conduct