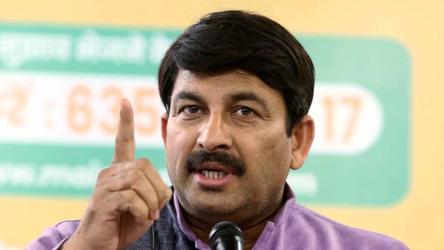 The Delhi unit of Bharatiya Janata Party (BJP) on Sunday filed a defamation suit against Aam Aadmi Party (AAP) seeking Rs 500 crore in damages after it tweeted a video that showed Delhi BJP chief Manoj Tiwari dancing to the tune of AAP’s campaign song for the February 8 assembly polls.

The video appears to be an edited version of Tiwari’s Bhojpuri albums with “Lage Raho Kejriwal” soundtrack.

“Who gave AAP the right to use my videos for its theme song for the polls?” Tiwari said.

The Delhi BJP president claimed that AAP chief and Delhi Chief Minister Arvind Kejriwal is “baffled” by the prospects of his party’s defeat in the assembly polls, scheduled on February 8.

Tiwari said a complaint has been made to the Election Commission about the video, and Rs 500 crore has been sought as damages for defamation and violations of intellectual property rights.

Delhi BJP’s media relations head Neelkant Bakshi said the use of Tiwari’s face in election campaign by AAP shows he is more popular than Kejriwal.

AAP has so far not reacted to the BJP’s comments.

Polling in Delhi will be held on February 8, followed by counting of votes on February 11. The Model Code of Conduct came into force on January 6 after the Election Commission announced the election schedule.