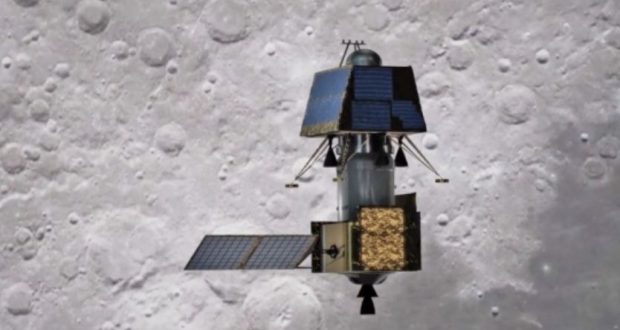 Bengaluru / New Delhi: Chandrayaan 2 lunar lander Vikram has been located on the moon’s surface and the ground station is working to establish contact, news agency PTI quoted ISRO chief K Sivan as saying today. ISRO had lost contact with Vikram, one of three components of the Chandrayaan 2 spacecraft, on Saturday morning while the lander was attempting a historic soft landing near the south pole of the moon. The lander stopped transmitting just 2.1 kilometres from the moon’s surface.
“Yes, we have located the lander on the Lunar surface. It must have been a hard-landing,” Dr Sivan said, adding that it was unclear at this stage if the lander had been damaged.

News agency ANI quoted Dr Sivan as saying the lunar orbiter had taken a thermal image of the lander.

“… orbiter has clicked a thermal image of Lander. But there is no communication yet. We are trying to have contact. It will be communicated soon,” he was quoted as saying.

As ISRO works to restore communications with Vikram, a senior official was quoted by PTI as saying it was “less and less probable” to link up with the lander.

Another official said the prospect of a “hard-landing” could mean Vikram, which was designed for a soft landing, may not have the “right orientation” because it may not have landed on its four legs.

India had expected to make space history with the Rs 1,000-crore Chandrayaan 2 mission. A successful soft landing on the moon’s surface would have made the country only the fourth – after the United States, Russia and China – to achieve the feat.

It would also have made India the first country to complete a soft landing near the South Pole on its first attempt.

In a statement to national broadcaster Doordarshan on Saturday, Dr Sivan had blamed faulty execution of the last stage of the operation for the loss of communication.

“The last part of the operation was not executed in the right manner. It was in that phase that we lost link with the lander, and could not establish contact subsequently,” he said.

The ISRO chief had earlier said the final minutes of the soft landing were the most tricky, calling them “15 minutes of terror”.

“This is a very complex process and it is new for us. It is a complex process even for those who have already done it. We are doing this for the first time, so it will be fifteen minutes of terror for us,” he said.

Vikram and lunar rover Pragyan, which is housed inside the lander, were scheduled to operate for one lunar day (equal to 14 Earth days) and carry out a series of surface and sub-surface experiments.

The lunar orbiter, which is in orbit around the moon, is now expected to be operational for seven years and help in the understanding of the moon’s evolution, mapping of its minerals and water molecules in polar regions.

Chandrayaan 2 was launched on July 22 from Sriharikota in Andhra Pradesh, on the back of a GSLV Mark III rocket – ISRO’s largest and most powerful. The mission was originally scheduled to launch on July 15 but that was aborted, with less than an hour remaining, after a technical glitch was discovered.

On August 20 the spacecraft was successfully inserted into lunar orbit and, at 1.15 pm on Monday, Vikram separated from the orbiter, entering a descending orbit around the moon.