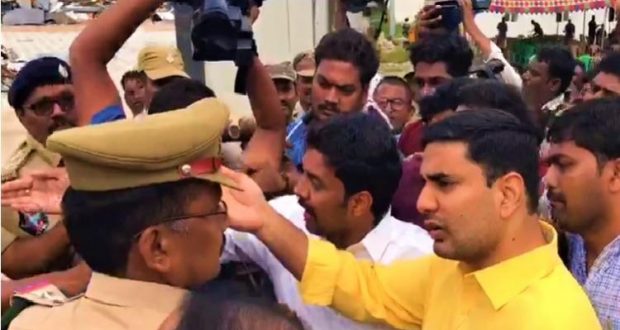 Telugu Desam Party (TDP) chief Chandrababu Naidu, son Nara Lokesh and several party leaders have been placed under house arrest on Wednesday to prevent them from participating in the ‘Chalo Atmakur’ rally, to protest against Jagan Mohan Reddy’s government.

Along with Naidu and Nara Lokesh Lokesh, ex-minister Devineni Uma, Vijayawada MP Kesineni Nani and Bhuma Akhila Priya were also taken into preventive custody. According to reports, several top leaders have been placed under house arrest, several of them being detained last night in Guntur.

Naidu and Lokesh have been put under house arrest in their residence at Undavalli, in the capital region of Amaravati.

Tension has been brewing in the state since, especially in the Palnadu region in Guntur district, after TDP alleged that 500 of its activists and sympathisers were attacked since the announcement of election results in May. To protest this, the party called for a ‘Chalao Atmakur’ rally, where Naidu planned to meet with alleged victims of the political violence.

“I am coming to Atmakur, to assure the victims, to save democracy and to exercise our rights. Public organisations and progressive people, come in solidarity with the victims. #ChaloAtmakur,” Naidu had tweeted on Monday. “We will not stop until justice is done,” he said.

Responding to TDP’s allegations, Union Minister of State for Home Affairs Kishan Reddy had assured the TDP that he will seek a report from the DGP on the law and order situation in the state.

Tension prevailed in Guntur town as additional police forces were deployed to foil TDP’s march planned to begin from the camp set up by the party for victims of violence by the ruling party leaders.

As a counter protest, the YSRCP also announced a rally on the same day, at the same place, citing political violence by TDP against YSRCP sympathisers, during their term.

Director General of Police Gautam Sawang had on Tuesday said there was no permission for meetings, processions, rallies or protests in Palnadu region as Section 144 of Criminal Procedure Code (CrPC) and Section 30 of Police Act were in force.