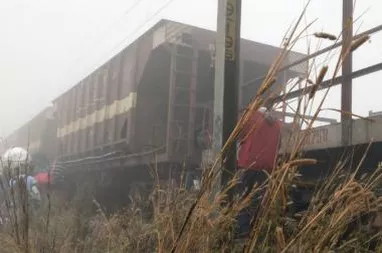 Bhubaneswar: At least 15 passengers were injured as five coaches of the Mumbai-Bhubaneswar Lokmanya Tilak Express derailed and three more were displaced after colliding with a goods train amid heavy fog near Cuttack in Odisha on Thursday, railway officials said.

Railway officials had earlier said that 25 passengers were injured in the incident but later officers who reached the site reported that four passengers were found to have suffered major injuries and 11 had received minor injuries.

Passengers with major injuries have been sent to Cuttack Medical College. All passengers are stated to be out of danger.

Officials said the accident happened when the passenger train hit the guard van of a good train around 7 am between Salagaon and Nergundi stations.

The officials said there was heavy fog at the site but it was not clear what led to the accident. The speedometer of both the trains have been seized for inquiry, East Coast Railway spokesperson JP Mishra said.

Buses have been arranged for all remaining passengers to move towards their destination.

Cuttack is around 10-12 km away and Bhubaneswar(Terminating station) is 35km. The accident disrupted train services in the area.

Five trains have been affected due to the accident where restoration work in underway. These include the Bhubaneswar-Mumbai LTT SF Express, the Puri-Rourkela Express, Dhanbad-Bhubaneshwar Rajyarani Express which have all been diverted via Naraj.

“East Coast Railway acknowledges with deep gratitude help of nearby locals and villagers who have displayed great humanitarian values and come to the rescue of injured passengers,” Mishra said.