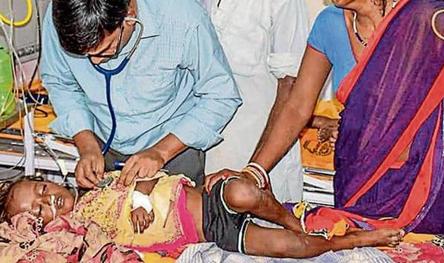 Alarmed over deaths of children in various north Bihar districts due to symptoms akin to that of acute encephalitis syndrome (AES), a seven-member team of experts from the central government is arriving here soon to find out exact reasons for the epidemic.

More than 29 children have died in Muzaffapur and its adjoining districts like Sitamarhi, Sheohar and Motihari this season. About 19 deaths in this season were reported from the SKMCH in Muzaffapur alone, while 10 children suffering from the symptoms of AES died at Kejriwal Maternity Clinic (KMC), Muzaffarpur.

Principal secretary (health) Sanjay Kumar said the experts would visit the affected areas to take stock of the situation and suggest effective measures to deal with it. “So far, no death has been confirmed due to Japanese encephalitis (JE). About 80% of the deaths were caused due to hypoglycemia,” he said, adding that as many as 222 primary health centres (PHCs) of 12 districts had been stocked with medicines and equipped with other facilities to treat AES cases.

Following deaths of more than 40 children in 2012 due to similar symptoms, the Centre had set up a group of ministers (GoM) and sent a team of experts.

The experts had a consultation with local medical experts at Patna AIIMS and later stipulated a standard operating practice (SOP) to follow to contain fatalities. The then Union health minister Harsh Vardhan had also visited Bihar.

On Monday, state’s health minister Mangal Pandey also met Vardhan, who is holding the health portfolio in the Union cabinet.

The principal secretary said that pediatric intensive care units had been opened at seven government hospitals, including at Darbhanga, Muzaffapur, Gaya and Patna, to deal with the situation. Additionally, three other government hospitals have also been equipped with PICU to attend to AES affected children.

Previous: MLA Sunil Naik inaugurates ‘Samagra Krashi Abhiyana’ in Bhatkal
Next: Children guilty of failing to take care of elderly parents may be jailed in Bihar