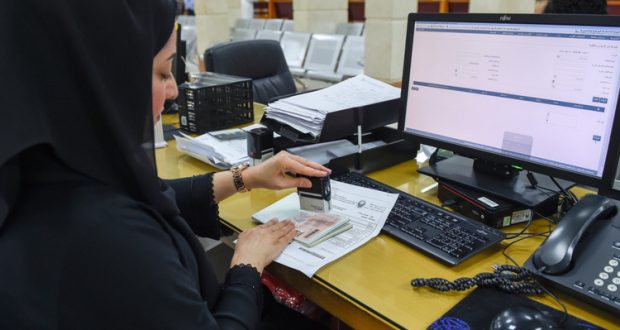 Dubai: Long-term UAE residency visas with 10-year validity, which were rolled out earlier this year, can now be obtained for as low as Dh1,150, the UAE government announced on Sunday.

According to eligibility criteria announced earlier, investors in public investment or senior professionals working with the investors as well as exceptional talents and researchers in various domains qualify for the 10-year visas.

Investors and professionals falling in the approved categories can apply to issue or renew the 10-year visa for Dh1,150 (Dh150 for the application and Dh1,000 for issuance). Family members of the applicants can also avail 10 years’ visas at the same cost.

“Very affordable”
Speaking to Gulf News, Vasu Shroff said that the visa charges are affordable compared to other developed countries.

“I paid Dh1,350 for each visa, including service charges. This is very affordable for a 10-year visa. In the UK the multi-entry visa costs around Dh5,000. This is a great initiative by the government to retain and attract investors and this has made our lives easier and hassle-free,” said Shroff, who is a Dubai resident since 1960.

Shroff added that he got long-term visas for all 11 members of his family, including his wife, children and grandchildren.

“All my family members benefited from this facility, we all got the visas. The service was great, we got the visas issued within 10 minutes, it was very quick, fastest service I have ever seen in my life. It was just a visa swap, they checked our passports, cancelled the old visas and issued the new ones,” said Shroff.

The 10-year visa scheme was rolled out in January and some Arab scientists and experts in the medical field were the first ones to receive it.

Five-year visa
Meanwhile, the authorities also announced the cost of five-year visas, which will be issued for D650 (Dh150 for application and Dh500 for issuance).

Children sponsored by their parents after completing 18 years or after finishing high school or university can apply for one-year renewable visa at Dh100.

Widows and divorced women and their children can also extend their one-year residency visas for Dh100. These two categories will be charged Dh100 for the issuance of the visa while no application cost will be charged.

The authorities also announced fee details for single and mult-entry visas for exceptional talents and researchers in various sectors. Both single and multi-entry visas valid for 180 days will cost Dh1,100 (Dh100 for the application and Dh1000 for issuance). 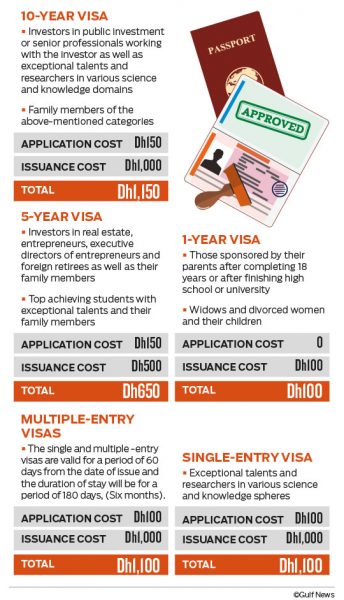