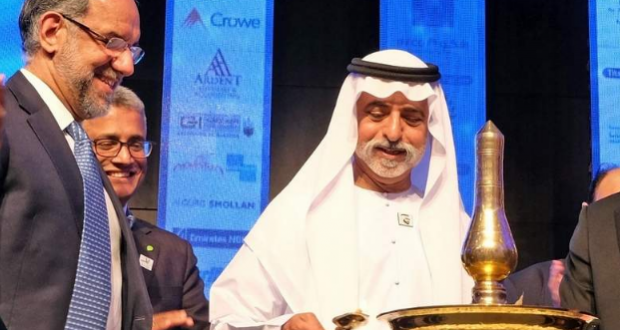 The UAE-India economic, political and cultural ties are in their golden era with bilateral trade and investments continuing to grow ever year, senior officials of the two countries said in Dubai on Friday.

Sheikh Nahyan bin Mubarak Al Nahyan, UAE Minister of State for Tolerance, commended the bilateral ties of trust and friendship that exist between the two countries. He also highlighted the vital role of sustainable knowledge-based economy, innovation and dialogue in achieving peace and human progress.

The ambassador also hailed the role of Abu Dhabi in establishing the Hindu temple in the UAE.

“The manner in which the government of UAE provided the land and facilitated the clearance of various architectural plans is quite remarkable,” he said while addressing conference in Dubai on Friday. He said the temple will serve all Indian communities because it has been designed with a broad vision, hence it is located in the middle of Dubai and Abu Dhabi to serve larger community.

Vipul, consul general of India in Dubai, on Friday, said bilateral economic, political and cultural ties between the UAE and India have been strengthening over the last few years with UAE’s investment into India crossing $10 billion.

“UAE-India trade continues to be very high. More than $10-billion investment has gone from the UAE to India. Over the last few years, there has been a high-level ministerial visits happening between the two countries on a monthly basis. These are not just formal visits but they have resulted in UAE-India relationship progressing in every area,” he added.

“Whether it is food processing, space or defence industries, the two countries are working together and making millennium strides,” Vipul said while addressing the 37th annual conference of The Institute of Chartered Accountants of India (ICAI) – Dubai Chapter.

The annual conference was held under the title of “Accelerating Millennium Strides – transforming by power of knowledge.” Nearly 2,000 members of the ICAI – Dubai Chapter – attended the annual conference. The other speakers who addressed the conference were Anshula Kant, managing director, State Bank of India; Osman Sultan, CEO, Emirates Integrated Telecommunications Co. (du); Mahmood bangara, chairman, ICAI (Dubai Chpater); Anish Mehta, vice-chairman of ICAI’s Dubai Chapter; and Ashish Vidyarthi, Indian film actor and motivational speaker. Vipul noted that Indi has been at forefront of global growth as it is the fastest growing economy in the world.

“We are taking so many people out of poverty every year. India is making millennium strides in the area of culture, science and technology and a host of other sectors. And same goes for the UAE. The focus of UAE has also been on tolerance, happiness and technology. And the UAE shows how can people work and live in harmony in a multicultural society,” Vipul added