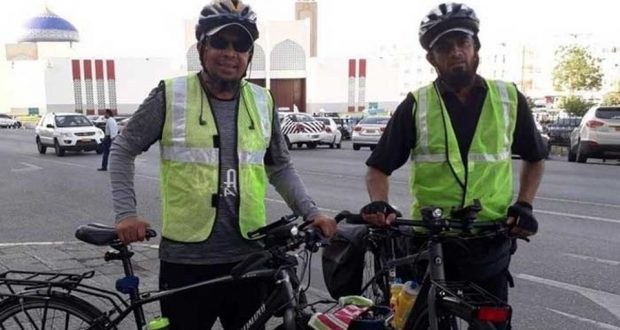 Two Indian men have arrived in the UAE on cycles pedalling 3,800-kilometer across three countries, three months after they set out on a cycling adventure to visit Makkah in Saudi Arabia.

Muhammed Saleem, 53, and his 42-year-old friend Rizwan Ahmad Khan are from Bangalore and have been cycling under the sun while fasting. They even lost their bicycles.

“Our bicycles got lost on our ferry boat ride from Bandar Abbas to the UAE. I was a little frustrated because it was the first day of fasting and it was too hot, But people in Sharjah port went out of their way to help us find our bicycles,” Saleem said.

“We experienced many different cultures, ate different foods and prayed in so many places,” Saleem told the Khaleej Times.

Originally, they planned to cycle their way through India, Pakistan, Iran, Iraq, Kuwait, and Saudi Arabia with no other means of transportation.

However, getting the visas to Pakistan and Iraq was not easy.

“We decided to pedal to Oman, fly to Tehran and pedal all the way to Bandar Abbas, and then go through the UAE to Saudi Arabia”, Saleem said.

The duo hopes to reach Makkah by July 25, just in time for Hajj that will start on August 9.

“From here, we will go to the Saudi border. Then, we will go to Riyadh, to Madina, and then to Makkah. My dream is to travel in Ehram cloth to Makkah, that is why we are going to Madina first,” Saleem said.

This isn’t the first time Saleem has embarked on such an adventure. He has been cycling for 35 years and has been a three-time state champion in India.

“I have cycled around Europe in 1989 and once pedalled from Kuwait to Dubai,” he said.

Saleem and Khan have been pedalling 75 to 100 kilometres per day.