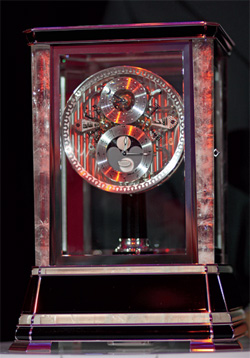 Move over Gregorian calendar. It’s time to keep time the Hegirian – or the Islamic Hijri – way. A Swiss company has created the world’s first mechanical clock based on the Islamic lunar calendar.

Parmigiani that takes pride in being ‘haute horlogerie authentique’ (authentic luxury watchmakers) calls it a “project dedicated to the Muslim community”.

The prototype clock was unveiled at Yas Hotel in Abu Dhabi on Tuesday by Parmigiani’s top officials in the presence of Mohammed Khamis bin Hareb Al Muhairy, Director General, National Council of Tourism and Antiquities.

The Hegirian calendar year is shorter than the Gregorian one – 354 days instead of 365; on leap years (there are 11 of them in a 30-year cycle), the number of days goes up by one.

Company president and master watchmaker Michel Parmigiani said this part of the world was the appropriate place for the ‘world premiere’ since it has been the cradle of Islamic civilisation.

It has taken him almost 20 years to develop this algorithm; the prototype unveiled took about four years to work on since “every element was manufactured from scratch, internally”. The clock will have a global launch in January at the Geneva Time Exhibition, and deliveries will commence from February onwards.

Here are the specifications. The Hegirian clock weighs 17 kgs; its cabinet structure as well as the base are made from silver; and it is embedded with black obsidians, quartz and rubies. The dial shows hours, minutes and dates in Arabic numerals, and date in calligraphy. It will cost, hold your breath, Dh9.5 million ($2.6 million), a pop.

“We will only manufacture a couple of pieces a year,” pointed out Parmigiani CEO Jean-Marc Jacot. For two good reasons. One, it will take a dedicated horologist almost a year to put together a piece of this art, so this will clearly not be a fast-moving category. Two, the company will be selective while deciding who gets to buy the watch. “Just having money is not a good enough criterion,” said Jacot. “They need to have culture and taste.”

And, of course, the time for them.