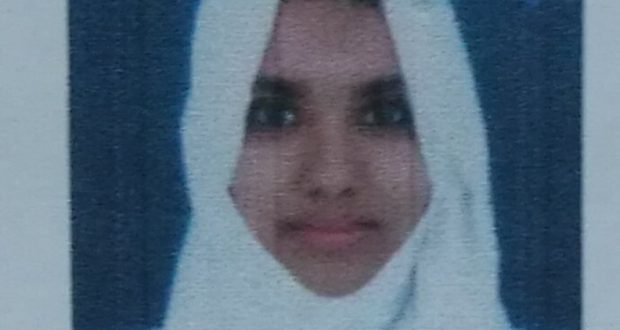 Muscat: A bright schoolgirl ‘loved’ by her teachers died when her family car struck a stray camel, prompting calls from road safety experts for drivers to take extra care on the roads.

Shehariz — a student of Indian School Salalah — was travelling with her father Tahir when the vehicle overturned after hitting a camel.

“They had gone to Muscat during the Eid holidays, and from Muscat, the father and daughter were going to Jalan Bani Bu Ali to meet their relatives when the incident happened,” Nobin M.G., Administrative Officer of Indian School Salalah, said.

While her father escaped with minor injuries, she was declared dead after she was taken to a nearby hospital.

Siraj Kannur, who is helping the family with the burial, said: “When the car hit the camel, he lost control and in the first topple itself the door opened and the child was flung out of the car.

“The entire family is in a lot of mental stress,” he added.

Shehariz is survived by an elder sister and a younger brother. “Their elder daughter is settled in Muscat. That’s why they came from Salalah to Muscat to drop her back home. The mother stayed back with the elder daughter in Muscat. The daughter (victim) and the father were going to meet a relative in Jalan Bani Bu Ali.

“In between tears, the mother keeps saying that her daughter should’ve just stayed back with them in Muscat, but maybe it was time. God called her and she went back.”

“The relatives are now taking her body for burial to Salalah,” the social worker said.

School authorities described Shehariz as a very bright student. “She was good at studies and the teachers also loved her very much,” Nobin said.

The family hails from Kannur, a coastal city in the south Indian state of Kerala.

Road safety campaigners have warned people to watch out for stray camels on roads.

“The camel may look like a weak animal, but this is highly deceptive,” said Ali Al Barwani, CEO of Oman’s Road Safety Association. “They are completely harmless animals and are just minding their own business, and that is why there are so many warning signs on the roads.

“It is important for drivers to be vigilant on the roads, because what has happened is very tragic and could’ve been completely avoided,” he added.

“Salalah is home to many animals, so you must be alert at all times, because they can cross the road at any time, and if you are not aware, the cost is very high.”

He also said that motorists should slowly come to a halt if a stray animal is on the road. “It’s dangerous to keep driving when there are stray animals on the road as motorists cannot predict what the animal’s actions will be,” he said.

Previous: UAE condemns massacre of Rohingya in Myanmar
Next: Bahrain tops expats’ list for best countries to work in, US, UK slip