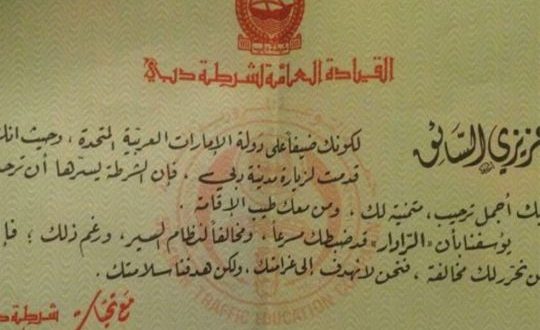 Dubai: A photo that went viral on social networking sites in the UAE has caused confusion among residents.

The letter in question was issued by Dubai Police, which allegedly waived the traffic fines of a Saudi national who was caught speeding.

“A letter from Dubai Police to a Saudi national who committed a traffic violation,” read the photo caption, which was posted by @i_am_joj.

The message on the letter said: “Dear driver, as a guest of the United Arab Emirates, we hope you had a pleasant visit to Dubai. The police were pleased to welcome you and hope you had a good stay. We are sorry to inform you that a radar caught you speeding. We will dismiss this traffic offence this once… our target is not to focus on your violation but on your safety… your safety is our goal.”

Dubai Police have responded to the rumours and confirmed that they are not dismissing any traffic fines.

“The logo on the letter is an old one, and this particular message was published 10 years ago as part of an initiative launched by Dubai Police General Command to spread joy to the public during holidays and special events,” said Colonel Faisal Issa Al Qassim, director of the Dubai Police security media department, who was quoted in the Arabic news site 24.ae.

Dubai Police urged the public not to believe unverified information published on social media, and emphasised that campaigns and police initiatives are always distributed through the authority’s official channels on social networking sites, such as Facebook, Instagram and Twitter.

The latest initiative currently implemented by Dubai Police offers motorists the opportunity to get a 100 per cent discount on their accumulated traffic fines.

The initiative, which was launched on February 6, 2019, comes in line with the Year of Tolerance.

Previous: Facebook working on an AR device that will let users type with their mind
Next: BJP’s Vishweshwar Hegde Kageri elected as Speaker of Karnataka Assembly