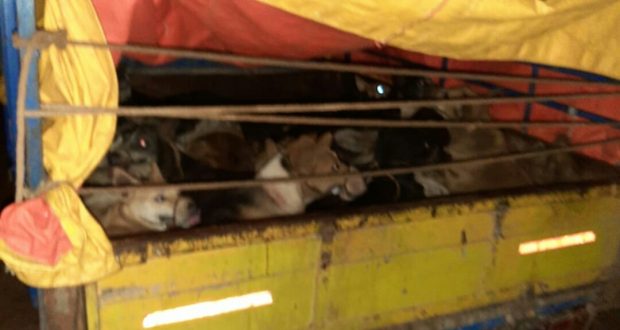 Video on ‘culling of Bhatkal dogs for meat’ sparks rumour

The rumour that dogs are being taken from Bhatkal town in Uttara Kannada district to neighbouring Udupi and Shivamogga districts to prepare biryani has triggered a controversy. However, the officials concerned and locals have denied the same.

It all began five days ago when a 90-year-old woman was bitten to death by a stray dog at Mundalli village. Three others were also seriously injured in the attack.

Though similar incidents had occurred in the past, the recent attacks in Mundalli prompted locals and public representatives to step up pressure on civic officials to check the stray menace. The officials were in fix as there is a ban on culling of stray dogs. They summoned dog catchers from Coimbatore in Tamil Nadu to do the needful. On Saturday night, they caught about 22 dogs in the village. When they were taking the dogs to Muttalli gram panchayat area before freeing them in a nearby forest, a large number of villagers opposed it. Later, the dogs were released near a place bordering Bhatkal and Udupi, locals said. But the matter took an unexpected turn when some miscreants, who had videographed the dogs in the transport vehicle, released the clip on social media, saying the canines were being taken to neighbouring districts to prepare biryani. They also spread a rumour that some hoteliers and meat sellers are mixing dog meat with that of chicken and mutton. The video spread like wildfire with people thinking twice before buying meat.

Some online portals and a section of the print media carried the news without verifying the authenticity of the video, creating confusion in the minds of people. Some meat shop owners said they had been making good profit as there is a ban on fishing from June to August. But the rumour on bowbow biryani (slang for dog biryani or dog meat) has affected their business. Senior officials from the departments of health and food control have assured people that dog meat is not being mixed with any other meat. Meanwhile, the people of Bhatkal have demanded action against miscreants for showing their town in bad light. Bhatkal police have clarified that the mixing of dog meat is just a rumour. They have also warned of strict action against those spreading false information on social media.