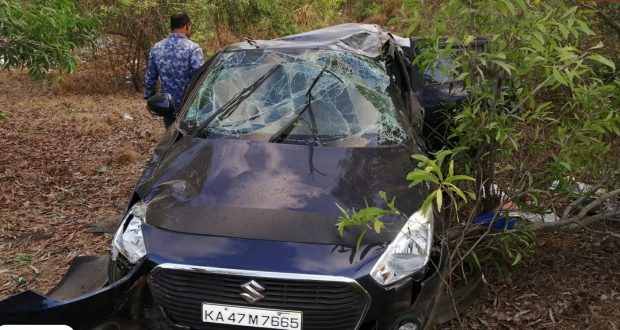 Bhatkal 9 May 2019: (Bhatkallys News Bureau) One person sustained severe injuries in a road mishap when a car overturned on Sagar road here on Thursday evening.

The injured car driver has been identified as Anand Balgi (40) a resident of Bhatkal.

According to the reports Anand was speeding towards Bhatkal from Kuntwani when on a curve in an attempt to avoid collision with another vehicle, Anand lost control over the wheels. As a result the car went off the road and overturned injuring Anand.

Locals rushed Anand to Bhatkal Taluka Government Hospital immediately after the accident, later he was shifted to Manipal hospital for further treatment.

As a result of the accident the car was also left completely damaged.

A case has been registered at Bhatkal Rural Police Station.