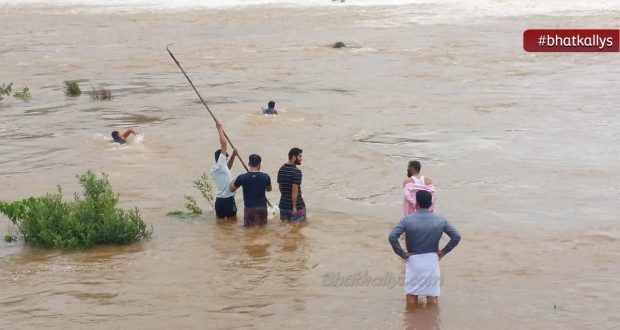 Bhatkal 11 July 2019:(Bhatkallys News Bureau) Even after a 24-hour long search operation, a team of local swimmers and youngsters led by Bhatkal Muslim Youth Federation (BMYF) remained empty handed with no traces of Ibrahim Abida, who went missing on Wednesday evening while swimming at Kadvinkatte Dam here.
Local youngsters continued their look-out for the missing youngster throughout the night and were joined my more youngsters on Thursday evening promptly guided by the office bearers of BMYF and other social workers.
The locals however also blamed the police department and coast guard for not providing any assistance in the search operation. Local Police official while speaking to Bhatkallys.com however denied any such claims and added that the officials along with coast guard was also involved in the search operation.
Ganesh KL, Bhatkal CPI told Bhatkallys.com that a boat was deployed by Coast Guard in the search operation and were looking for Ibrahim in Shirali and adjoining rivers and sea waters.
“We can’t do much when it comes to rivers and seas. It is the Coast Guard that has the adequate equipment and it comes into play in such cases. If we have a team of good swimmers only then we can go into water and help otherwise it is Coast Guard that provide help, and even today the officials of Coast Guard are working on the site, looking for the boy” Ganesh told Bhatkallys.com
A senior official of BMYF however added that both police department and Coast Guard were of no help in the operation. “They clearly told us that they don’t have equipment and boats for carrying the search operation. Deployment of which boat are they speaking about then? They are lying not even a single boat is deployed by them here” he said.
“We arranged our own boat from local fishermen and when we needed kerosene for using in it, Bhatkal Tahsildar came and helped us. He arranged for kerosene. It was really helpful. Other than that, Police department and Coast Guard didn’t really help us” Imtiyaz Udyawar, President of BMYF said.
2019-07-11
Abdussubhan