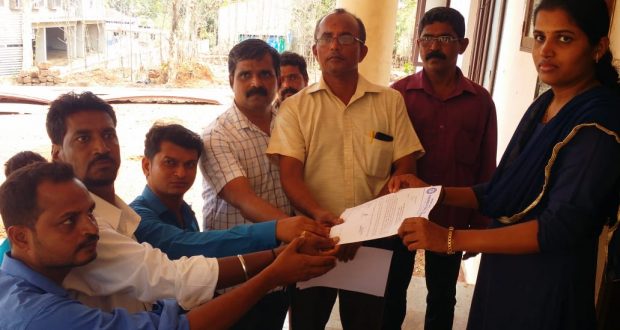 Memorandum submitted to AC against continuous power cut in Bhatkal

Bhatkal 7 June 2019:(Bhatkallys News Bureau) Members of Nagarika Vedike Bhatkal on Friday submitted a memorandum to Bhatkal Assistant Commissioner’s Office urging to take actions regarding frequent power cut in the town which is creating problems to the public. The memorandum was submitted on Friday.

The Letter addressing to District Commissioner stated that, “Due to frequent Power-cut in Bhatkal Taluka, has created problems, especially to the  elderly and sick people who are admitted in the Hospitals across Taluka”

It further stated that, “As the rainy season has yet not started in the locality, people are suffering due to rise in temperature. Food stored in freezer are also getting spoiled due to frequent Power cut.”

Memorandum later stressed to transfer HESCOM staff who are working in Bhatkal for the past 10 to 15 years.

On this occasion Sukrappa Naik, Madev Devadiga, Ramesh Naik, Bhaskar, Nisar Ahmed and others were present during the occasion.