Honnavar – 20 May 2011: In a shocking incident, four people died when a speeding truck crushed them soon after they alighted from a bus.

The accident occurred on Friday morning 5:30 am at Sharavati circle here in Honnavar. The passengers were collecting their baggage from the rear end of the bus which was parked at the side of the road when the speeding truck smashed the bus from behind and crushed all four people.

The deceased have been identified as bus cleaner, Akhil from Padubidri, Syed Noorullah from Kaup, two brothers Amjad and Zubair Khan from Shamsi. Amjad was coming from Saudi Arabia for his marriage and his brother Zubair had went to Mumbai to receive him.

The police have arrested the driver of the truck, who was trying to flee from the scene.

According to the sources, two died on the spot while two declared brought dead in the hospital. The dead bodies have been handed over to their relatives at 10:00 am after conducting post-mortem at Honnavar Govt Hospital. 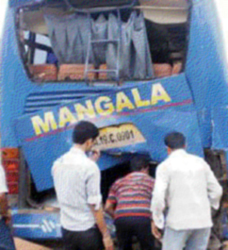