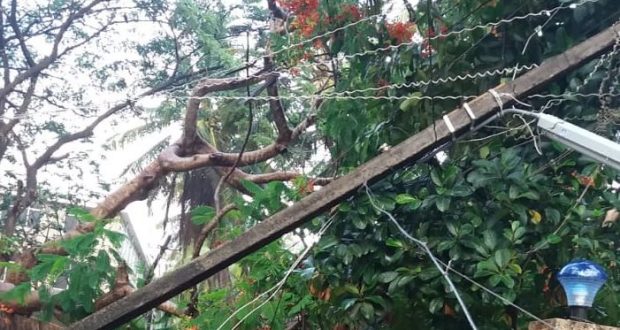 Bhatkal town and the nearby places have been witnessing heavy rain for past few days which has damaged several properties including at least six electric polls at DP colony of Bhatkal following which power supply in town took a hit on Tuesday night and Wednesday morning.

Moreover, IMD has issued a “red” warning for heavy and widespread rainfall for Saurashtra and Kutch region for Thursday. Coastal Karnataka, Kerala, Konkan, Goa, and south Gujarat are expected to receive widespread rainfall over the next three days. High waves in the range of 3.5 to 5.3 metres are forecast along the coasts.

Rains are expected to continue till June 12 or June 13. Thereafter, intensity might drop but light to moderate rains will continue. It is anticipated that Cyclone Vayu would help the state of Karnataka in gaining its surplus rainfall value.

High and turbulent waves more than 6-meter-tall are forecasted along the coast of Karnataka. The sea conditions would be rough to very rough and the fishermen are advised not to venture out in the sea during the same period. During this phase, wind speed is expected to reach 70-80 kmph gusting to 100 kmph for at least the next three to four days.

Previous: WhatsApp will soon sue you if you violate its terms of use
Next: Files by Google is getting a dark theme in its latest beta