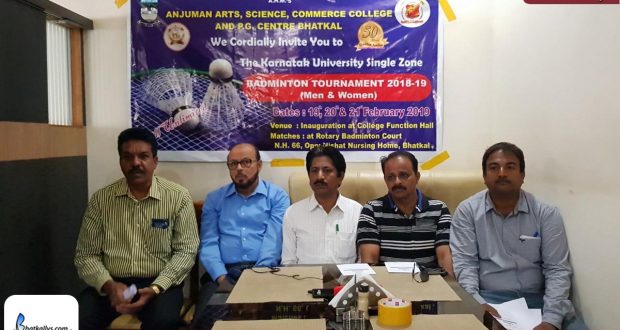 Director of Physical Education, Karnataka State Law University (KSLU), Dr. Khalid Khan, will be presented as the chief guest, while Askiri Mohammed Yaseen, President of Bhatkal Community Jeddah, will be the guest of honour of the event that will be presided over by Damudi Abdur Rahim, Vice President — I of Anjuman Hami-e-Muslimeen. College Principal Mushtaq Ahmed informed in a press conference at a private hotel here on Sunday.

“This will be a three day event, and students from several colleges and institutions will participate in the event” Mushtaq Ahmed added.

Announcing that the event will mark the beginning of the Golden Jubilee celebrations, College Board Secretary, Mohsin Shabandir also added that the event will give more exposure to the students and it will also promote the institution at the higher level.

Bhatkal Rotary Club president Srinivas, while speaking at the press conference, lauded the efforts of college management in organizing the event and also extended support from Rotary club throughout the tournament.

The event will commence at 9.30 am on Tuesday morning, at the Function hall in the college campus, and will be played in both men and women categories.

College Board Secretary, Mohsin Shabandri, along with the management, Principal, staffs and students has requested people to turn up in numbers to make the event successful.

Previous: FB post which predicted Pulwama attack in 2018 creates suspicion among people
Next: 4 including 2 foreigners arrested for organising Rave parties in Gokarna