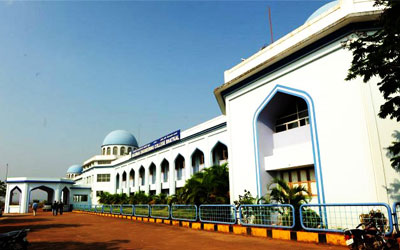 (By Aftab Husain Kola)
Away from the din of the city and the curling smoke from industrial chimneys, Bhatkal is one of the fascinating towns to explore and rejuvenate the mind and the soul.

The world describes Kashmir as a paradise with its apple orchards and gulmohur trees. Wedged between the lofty Sahyadri Mountains (also known as the Western Ghats) and the azure Arabian Sea, Bhatkal, situated in the district of Uttara Kannada (North Kanara, in English) in the state of Karnataka , India , is also a little paradise. A taluk headquarters Bhatkal is located midway between Mangalore and Karwar.

While the culture of the denizens of this picturesque vibrant town, is of mixed origin — the two significant strands being the Arab and local lifestyle — the Navayath community here have catapulted this town to international fame for all the good reasons. Bhatkal is a prosperous town with old quaint houses sharing space along with modern designer mansions and elegant shopping complexes. Steeped in history, abounding in edicts, monuments reflecting the glory of a bygone era, the thriving town is a canvas of peace, affluence and piety.

With a multi-religious population of about 60,000, the town is often referred to as a “mini model of India ” representing and reflecting infinite diversity. Besides the predominant community of Muslims and Hindus, there is a sprinkling of Christians and four Jain families (it may be recalled that Bhatkal was once ruled by Jains). Navayaths, who constitute a larger percentage of the population, trace their progeny to the Arabs who set foot on this land more than 1000 years ago. Among the Hindus, Namadharis (Ediga) form the majority. We learn from the pages of history that by virtue of its strategic location, Bhatkal has for centuries been eyed by various dynasties/rulers. During its chequered history, Bhatkal witnessed the rise and fall of several dynasties and rulers. A part of Hoysala empire in 1291 to 1343, Bhatkal later fell into the hands of the Vijayanagara empire. After the disintegration of the empire, the Saluva (Jain) rulers of Hadwalli (a town on the State Highway towards Jog Falls ) brought this coveted town under their control. Many temples and basadis were constructed during this period. Vestiges of this period can be found in MudBhatkal where a few temples of that era still stand.

Meanwhile, the Portuguese also made their presence felt in the beginning of the 16th century. From the Keladi rulers, Bhatkal was passed on to Hyder Ali and Tipu Sultan and later to the British in 1799 after Tipu was martyred.

The town is strewn with educational institutions of repute managed by Anjuman Hami-e-Muslimeen, a pioneering education trust founded in 1919.It has played a prominent role in spreading the light of education across all sections of society. The Anjuman Engineering College at Bhatkal, which completes 25 years in 2005, is well known throughout the country for imparting quality technical education. The Hindu-managed Bhatkal Education Trust also runs a few institutions. The Jamia Islamia is a reputed centre for religious studies. On the social domain, Majlise Islah Wa Tanzeem is rendering valuable service to the welfare of the community since its inception in 1912.

Visitors to Bhatkal go back carrying with them pleasant memories of the flora and fauna, the surreal beaches, archaeological splendours and elegant mosques. The archaeological treasures at Bhatkal speak volumes about the history of Bhatkal and they sketch its rich heritage. The extant Kethapayya Narayan temple in MudBhatkal was constructed in 1545 by Ketha Pai, a noted Goan jeweller, and was the most outstanding architectural specimen of that time. The Parshwanatha Jain Basadi on Bazaar Main Road ranks among the ancient structures of Bhatkal. The town is home to some magnificent mosques like the Jamia masjid, the Khalifa masjid, the Sultani masjid and the Noor masjid. Some old mosques date back to more than a couple of centuries. The entire Bhatkal beach area with a fishing port and a lighthouse atop a hillock offers a breathtaking view. One can get a panoramic view of the villages from the lighthouse. If one looks around, the Arabian Sea with colourful fishing boats drifting and bobbing is a treat to the eyes. Here, the river Sharabi drains into the Sea. Taking a break, one cago across to the Murdeshwar tourist resort, a popular tourist destination, that is close-by to Bhatkal.